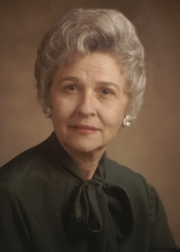 Frontline Ministries, Inc., and the Exodus Mandate Project announced the selection of Mrs. Bobbie Ames as the recipient of the 2016 Dr. Robert Dreyfus Courageous Christian Leadership Award. Established by Frontline Ministries, Inc., in 2007, this award is presented annually to honor and recognize Christian leaders who have exhibited moral courage through their unique contribution to the Church by advancing Christianity in the culture and life of the nation. This contribution may run counter to the prevailing culture of the Church and society.

In 1965, John and Bobbie Ames founded the Perry Christian School in Marion, Alabama, with 32 students in six grades. They poured their time, hard work, enthusiasm, money and their unique talent of leadership for the purpose of securing an opportunity for parents to educate their children with high academic standards in our Christian and American heritage. The school had been relocated to Montgomery, Alabama and was renamed Emerald Mountain Christian School. The school celebrated its 50-year anniversary in 2015.

The school has maintained a classical curriculum that is distinctly Christian, not only providing students with a sound education, but also teaching Christian values, self-discipline, godly virtues and a love of America, which will carry them through life as they fulfill God’s plan. She started a library at the school to preserve and to assure vital and pure research with over 45,000 volumes in the collection. The school is a model for Principle Approach Christian education for the Mid-South region.

Bobbie Ames currently writes monthly for the Alabama Gazette, “The Education Station” on issues of education and history from a biblical worldview. She is a writer, historian, lecturer and advocate for K-12 Christian education and America’s Christian heritage.

A few weeks before she passed, Phyllis Schlafly, the former founder and director of Eagle Forum, wrote this inspiring message to Bobbie: “Congratulations, Bobbie, on maintaining your school for so many years, to give so many children a proper education. Giving all those hundreds of children a Christian education is your great legacy. Your school is the model for what dedicated parents should do in every state. I am proud to have you as my friend and continue to be a big admirer of your accomplishment.”

Dr. Dreyfus, for whom this award is named, is a prominent retired Florida dentist and inventor of a device to relieve neuromuscular pain for dental use. He served as president of the Florida Dental Society of Anesthesiology. He has given more than 47 years of volunteer work on behalf of family values and K-12 Christian education in Florida and now serves as the Florida state coordinator for the Exodus Mandate Project.